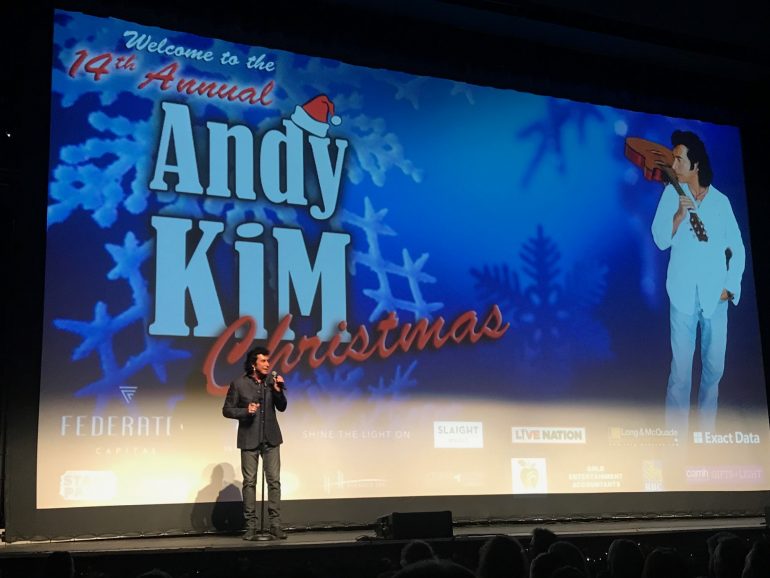 For 14 years, the Andy Kim Christmas Show has ushered in the holiday season...

This year has been no different, with the main purpose of “giving back” to the CAMH Foundation Gifts of Lights Program

Founded by the legendary hitmaker singer/songwriter Andy Kim of “Sugar, Sugar” and “Rock Me Gently” fame.

The bevy of shining Canadian contributors continues to break an unimaginable high ceiling year-in, year-out. With worldwide famous comedian Russell Peters MC-ing his second time in as many years.

As with each year, Andy Kim showcases new upcoming Canadian talent. Notables have included The Arkells, The Beaches to The Trews — this year Canadian Idol Theo Tams was featured.

A pleasant surprise was the appearance of notable Canadian astronaut Col. Chris Hadfield and Barenaked Ladies’ Kevin Hearn performing a touching tribute to the season.

Coincidentally, it was Andy Kim’s birthday that day, and, of course, Russell Peters was kind enough to instigate an impromptu “Happy Birthday“ audience sing-a-long.

Of course, every yearly highlight included Andy Kim’s performance of the 60s classic, “Rock Me Gently”, interspersed with Lou Reed’s “Walk On The Wild Side”. This year accompanied by RUSH guitarist Alex Lifeson which made it even more special.

Fresh off a tour with Arcade Fire, Hometown heroes Broken Social Scene started off the second set with the favourite, “Cause-Time”.

As with tradition every year, Ron Sexsmith ushered in the holiday season with popular (a Unity360media favourite), “Driving Home For Christmas”.

The next set of famous musicians would seem to be an unimaginable synchronous anomaly.

Starting off with Max Webster’s Kim Mitchell, “All We Are” with accompanied vocals by longtime guitarist Peter Fredette was a prelude to a surprising maple leaf tsunami of CanCon nostalgia.

Next, RUSH guitarist Alex Lifeson joined the “Wild Party” stage for a bluesy-rendition of “Lager & Ale”.

It has been over 35 years since RUSH and Max Webster shared the stage at the old Maple Leaf Gardens (at the corner of Carleton and Church).

So, to have two principals of both iconic Canadian bands performing the rare collaboration from 1989 Max Webster album Universal Juveniles, “Battle Scar” was a treat beyond music-rock-fanboy-fantasy comprehension.

As MC Russell Peters reminisced of the many “suburban kids” who acquired their music from unorthodox methods (such as from Bata shoes).

One such Canadian band who participated in weird record distribution promotions was the next guest Tom Cochrane (and his longtime bandmates) of Red Rider fame opening with “Boy Inside The Man”.

For the hardcore RUSH trivia fans, it has been over 50 years since Lifeson shared the stage with Red Rider/Tom Cochrane bassist Jeff Jones, who was the original bassist/singer when Lifeson and drummer John Rutsey performed in the first incarnation of RUSH in 1968. Cochrane & bandmates finished off with the uplifting 1991 worldwide hit “Life is a Highway”.