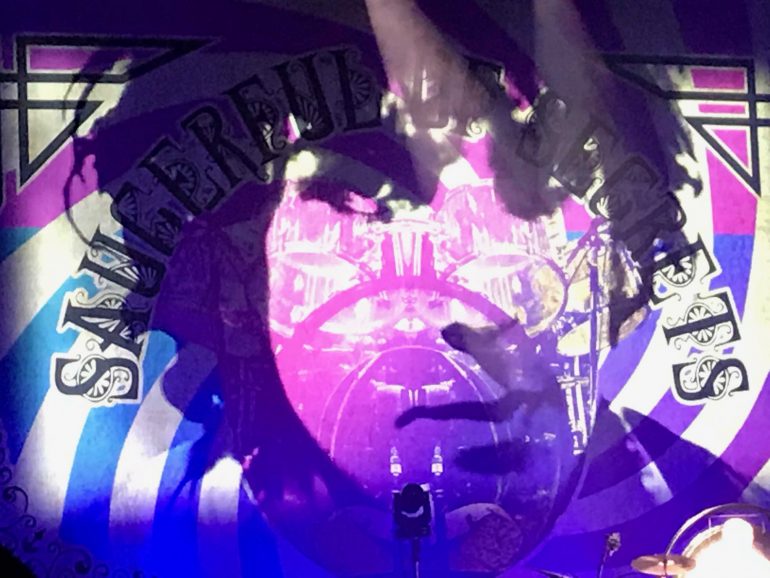 It has been close to 15 years since Roger Waters rejoined David Gilmour, Nick Mason and Richard Wright as Pink Floyd for a one-off reunion to emphasize the importance of world hunger in 2005 for Live Aid 8.

To many that hoped and prayed for a full reunion tour, those hopes were buried for all of eternity, Obscured by Clouds to reminisce possibly for one last time. One last glimmer.

Where there is hope, there is always a glimmer. When drummer Nick Mason decided to come out of retirement in 2018 for a small handful of European club dates as Nick Mason’s Saucerful of Secrets, the glimmer began to pierce the Obscured Clouds.

Let There Be Light …

Enthusiasm abounds, especially with one time-warped individual in tie-dye dancing back-and-forth the length of the venue (worth the price of admission).

Surprisingly, bandmates reminisced vividly of the deep historical connections with the city of Toronto and Floyd through the decades.
Colourful, 60’s psychedelic, lava lamp imagery merged with grayscale footage of Mason and founder Syd Barrett propelled the audience to more “free” times.

Touching upon rare gems such as “Arnold Lane”, “Bike” & “Lucifer Sam” to many, most of these “treasures” were assumed to be buried for all eternity, never to be played live ever again.

On this day, the spirit was rekindled for many from the past, present and hope for the future.

The spirit of Syd Barrett will continue to Shine On…

Encore:
A Saucerful Of Secrets
Point Me At The Sky