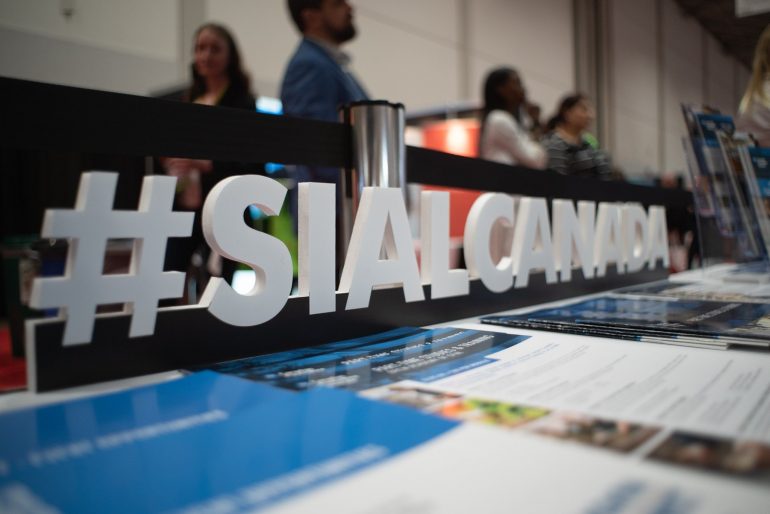 The 16th edition of the International Food Show (SIAL Canada) and the Equipment andTechnology Sector (SET Canada), which took place from April 30 to May 2 at the Enercare Center in Toronto, has just closed its doors on a real success! During the three days of the show, the major players in the agri-food industry set a record for attendance in Toronto, with the growth of almost 10% compared to 2017. With nearly 80 conferences and activities, SIAL Canada, the only “One Stop Shop” in the industry, is once again a must-attend event for the Agri-food sector.

This edition of SIAL Canada and SET Canada topped records again both in terms of suppliers and visitors. According to Xavier Poncin, SIAL Canada’s Executive Director, the 2019 edition proves the importance of such an alternating event in Canada’s two largest provinces. Never before has local representation, co-mingled with exceptional international entrants, offered such numerous innovations. “Not only have we seen international business growth driven by Canada’s international momentum, and the signing of multiple international agreements, but a significant achievement, Ontario businesses have proven- through a 20 per cent growth in participation, 20% (record this year) versus 2017, and their record involvement in the SIAL Innovation Contest(more participants- that SIAL Canada is the best platform to grow their business in Canada and internationally. We are definitely anchored in the Canadian landscape “coast to coast“!

Innovation, local and international, the key words of SIAL Canada! With 1130 exhibitors and brands from more than 50 countries spread over 280,000 square feet and some 25,106 professional visitors from over 60 countries.

“Italy in the spotlight! Italy was the country of honour, all for the pleasure of our taste buds! The Dolce Vita was enjoyed around the aisles but so much more! Indeed, the official inauguration of the show was held under the colours of the Italian flag honouring national and international dignitaries during their various speeches. Among them were Mr. Ernie Hardeman, OMAFRA’s Minister, Mr. André Lamontagne, Mapaq’s Minister, Mr. Claudio Taffuri, Ambassador of Italy in Canada, Mr. Jean-ClaudePoissant, Parliamentary Secretary in lieu of Federal Minister of Agriculture Marie-Claude Bibeau, Michael Thomspon, Deputy Mayor of the City of Toronto. Mr. André Coutu, President and Chief Executive Officer of the Agri-Food ExportGroup, Mr. Nicolas Trentesaux, SIAL Network Director and Mr. Xavier Poncin, SIAL Canada’s Executive Director. It should be noted that for the first time at SIAL Canada, the 3 levels of government were represented at the same time: federal, provincial and municipal.

The 3 major competitions that launched the show. SIAL Innovation: On the first day of the show, the three big winners of the prestigious SIAL Innovation contest were unveiled in front of visitors and journalists! 117 entries were submitted to participate in this 12th edition of the contest. For the first time this year, the Hopeful prize, dedicated to food start-ups, was added to the three traditional Gold, Silver and Bronze awards.

Congratulations to UNBUN KETO FOODS for its product VEGAN KETO BUNS, which won the 2019 SIAL InnovationGold Grand Prize! Why this product? Unbun is truly unique. It is appropriate for consumers who seek products that are paleo, grain-free, starch-free, vegan, keto and gluten-free but it also tastes great to consumers accustomed to eating conventional bread. Congratulations to Yummy Doh for its product RAW COOKIE DOUGH, which won the 2019 SIAL Innovation Silver Grand Prize! Why this product? Two treats in one! Yummy doh is a vegan cookie dough product that is safe to eat raw and that can also be baked into crispy cookiesCongratulation to Lofbergs Canada Inc for its product ICE, which won the 2019 SIAL Innovation Bronze Grand Prize! Why this product? Creating an oat-based creamy, smooth-textured coffee drink is a big technical accomplishment but putting that drink into a sexy, cylinder-shaped cardboard package makes this product doubly noteworthy!

The first International Cheese Competition by SIAL. This cheese contest was the first of its kind on site as well as for Canada! The jury chaired by Gurth Pretty and made up of professionals from the cheese industry evaluated 230 cheeses from 9 countries across 23 categories. Following the jury’s deliberation, the 23 medals (1 per category), the Best English Cheese, Best Italian Cheese, Dairy Farmers of Canada, Best New Cheese and Best Winner awards were revealed on the Cheese Area by SIAL. Congratulations to the cheese honoured Grand Champion Cheese: Alfred the Grand Cru farmer, a Quebec cheese from La Fromagerie La Station! (also named Best Firm Dough Cheese and Best Dairy Product of Canada!) Find the full Press Release International Cheese Contest by Sial Canada here. Olive d’Or: For the 13th edition of the largest international competition for extra virgin olive oil in Canada, the jury, chaired by Christine Cheylan, expert in olive oils, was composed of 7 members all with experience undisputed. As a result of the jury’s deliberation, the 12 best extra-virgin olive oils submitted by producers from around the world were selected to be crowned with gold, silver and bronze in their respective categories. New this year, a special Italy prize was awarded to highlight the country’s presence at SIAL Canada 2019. Find the full Olive d’Or press release here.

The Cuisine by SIAL, a lively space which, every day, hosted new activities! On the first day, on the occasion of The Canadian Plate Challenge, SIAL Canada partnered with Arrell Food Institute/ University of Guelph in an exceptional cooking sustainability competition. He challenged 4 award-winning Canadian chefs to create a 100% local meal while contributing to the respect of the planet and the health of its guests. Among them were: Andrea Carlson of Burdock and Co. in Vancouver, British Columbia; Laura Maxwell of Sélect Bistro in Toronto, Ontario; Josh Crowe of Monkland Taverne in Montreal, Quebec; and Pierre Richard of the Little Louis’ Oyster Bar in Moncton, New Brunswick.

For the second day, the new Food Startup sector was in the spotlight at the Pitch Competition! They had only three minutes to seduce a jury of experts, an exciting subject in an innovative format! Organized in collaboration with the City of Toronto and CFWI IC Niagara College, the competition honoured 4 major winners. Named first: Honey Vinegar of Dare2Dream who received a booth for the next edition of SIAL Canada in Montreal in 2020.

On the final day, SIAL Canada partnered with Taste Canada to bring together a cookbook event to unveil a groundbreaking event: Inspired to Taste Canada: Celebrated Cookbook Authors Present Local Recipes. The latest culinary trends were illustrated through cookbook authors’ demonstrations. The various authors autographed their book to interested visitors on site!

Inspire Drink, a reflection of a new innovative sector! On the Inspire Drink space and during the 3 days of the show, there were 2 major themes: infused drinks and alcoholic beverages (or not!). In the morning, Gail Gastelu, SIAL Canada expert in brewed beverages, shared her passion for tea, coffee and marriages of fascinating products. In the afternoon, Emmanuel Perrier introduced us into the world of cocktail and mocktail (non-alcoholic cocktail), unforgettable experiences between cutting ice and almost instantaneous gel of any liquid, the attention was at its height. At the end of the day, the Aperitivo gave everyone an appointment for a tasting on an Italian note. Exciting content to discover during conferences. Each of the 50 conferences presented to the visitors were given by real experts of their category, which ensured thegreat diversity of content was both informative and useful.

Again this year, SIAL Canada was proud to welcome 14 experts from 12 sectors. Their wise advice and professionalrecommendations were available at Central Experts Hub. In this space and during the three days of the show, it was not only possible to attend many discussion panels, but also to make an appointment with each of the experts. Thank you to all of them for actively participating in the success of this 16th edition! To find the full list of experts, visit: https://sialcanada.com/en/experts/

The buyers program, always a success. The buyers program is once again showing spectacular figures! In fact, 716 meetings were held during the 3 days of the show. This space brought together 87 buyers from 14 different countries and 356 exhibitors from 39 countries.

Two-thirds of exhibitors believe that their meeting will lead to a sale and 100% of buyers have expressed their wish to return to the program next year. The program included the largest distributors in the United States, Mexico and China, such as Bozzuto’s, Atalanta, Sigma Foodservice and Angliss Shenzhen, as well as major retailers in Canada, including Coleman’s and Simply for Life. Many thanks to our official partners: OMAFRA, MAPAQ, Agriculture Canada and EDC.

SIAL Canada is proud to continue its commitment with Daily Bread Food Bank. This program aims to help reduce food waste by distributing food surpluses at the show. This year 2660 pounds of food were donated to the association. SIAL Canada also gave the Central Expert Hub a check for $ 12,000.

The unique multicultural evening! SIAL Canada is also a celebration, that’s why on the evening of the second day an ethnic networking evening was offered to exhibitors. It was in this festive spirit that the national and international exhibitors, international buyers and partners of the show have gathered. A colourful event sponsored by Candesa foods, during which David Bazzali, Italian tenor, charmed the guests along with the Bollywood dancers and belly dancer. A rich and captivating show! The entire SIAL Canada team congratulates everyone who made this show a success!

SIAL Canada is proud to continue its commitment with Daily Bread Food Bank. This program aims to help reduce food waste by distributing food surpluses at the show. This year 2660 pounds of food were donated to the association. SIAL Canada also gave the Central Expert Hub a check for $ 12,000.

The unique multicultural evening! SIAL Canada is also a celebration, that’s why on the evening of the second day an ethnic networking evening was offered to exhibitors. It was in this festive spirit that the national and international exhibitors, international buyers and partners of the show have gathered. A colourful event sponsored by Candesa foods, during which David Bazzali, Italian tenor, charmed the guests along with the Bollywood dancers and belly dancer. A rich and captivating show! The entire SIAL Canada team congratulates everyone who made this show a success!

We look forward to seeing you next year for the 17th edition of SIAL Canada in Montreal, at the Palais des Congrès. Mark your calendar: April 15 to 17, 2020