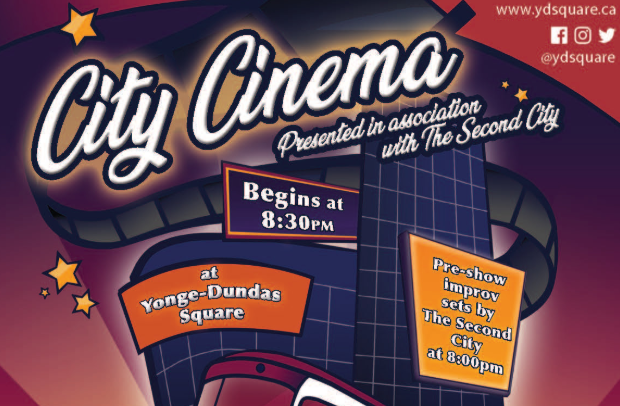 The Second City will bring the Square to life with hot improv sets all summer long to warm up the audience before each screening! The cast includes Alan Shane Lewis, Natalie Metcalfe, Christian Smith, Matt Folliott, Clare McConnell, and Jillian Welsh.

On June 25, City Cinema will kick off with the supernatural spectacular Ghostbusters (1984) starring Harold Ramis and Bill Murray. When three silly scientists lose their positions at a university, they decide to become “ghostbusters” to wage a high-tech battle with the supernatural. They stumble upon a gateway to another dimension that will release evil upon the city. The Ghostbusters must now save New York from complete destruction.

On July 2, City Cinema will screen Date Night (2010) starring Steve Carell and Tina Fey, famous alumni from The Second City Chicago. In this hilarious film, a case of mistaken identity turns a bored married couple’s attempt at a glamorous and romantic evening into something more thrilling and dangerous.

On July 9, City Cinema will present a film starring one of Canada’s most beloved comedic actors: John Candy in Planes, Trains and Automobiles (1987). This classic film follows Neal Page (Steve Martin) as he tries to get home to spend Thanksgiving with his family. After travel delays in the sky and on the ground, his sanity begins to fray. Worse yet, he is forced to bunk up with talkative Del Griffith (John Candy). Together they must overcome every obstacle of holiday travel and survive each other.

On July 16, Toronto audiences can enjoy A Mighty Wind (2003), starring The Second City alum Catherine O’Hara, Eugene Levy, Jane Lynch, and Fred Willard. This mockumentary captures the reunion of 1960s folk trio the Folksmen as they prepare for a show at The Town Hall to memorialize a recently deceased concert promoter.

On July 23, YDS invites people of all ages to enjoy Up (2009), starring The Second City alumni Ed Asner. Up is the Pixar animated favourite that tells the story of 78-year-old Carl Fredricksen. Tying thousands of balloons to his house, he flies away to the South American wilderness to fulfill a lifelong dream. But curmudgeonly Carl’s worst nightmare comes true when he discovers a little boy named Russell is a stowaway aboard the balloon-powered house.

On July 30, City Cinema will host a ladies night out with a screening of Sisters(2015) starring Tina Fey and Amy Poehler. Two sisters, on different paths in their lives, decide to throw one last house party before their parents sell their family home

On August 6, YDS invites audiences to chill out at City Cinema with the screening of Cool Runnings (1993), starring John Candy. When a Jamaican sprinter is disqualified from the Olympic Games, he enlists the help of a dishonoured coach to start the first Jamaican Bobsled Team.

On August 13, City Cinema will make fetch happen with Mean Girls (2004), starring Tina Fey, Tim Meadows and Amy Poehler. After being homeschooled abroad, Cady finally gets to experience public school and is thrown into the cruel, tacit laws of popularity that divide her fellow students into tightly knit cliques. She unwittingly finds herself in the good graces of an elite group of cool students dubbed “the Plastics,” but Cady soon realizes how her shallow group of new friends earned this nickname.

On August 20 City Cinema gets groovy with the first instalment of Mike Myer’s franchise Austin Powers: International Man of Mystery. A 1960s secret agent, Austin Powers, is brought out of cryofreeze to oppose his greatest enemy in the 1990s, where his social attitudes are glaringly out of place.

City Cinema will close with the best in show! No really, on August 27, City Cinema will screen Best in Show (2000) starring Catherine O’Hara, Eugene Levy and Jane Lynch. Best in Show is a mockumentary about a colourful array of characters that compete at a national dog show.

For more information and a full schedule of events, please visit YDSquare.ca