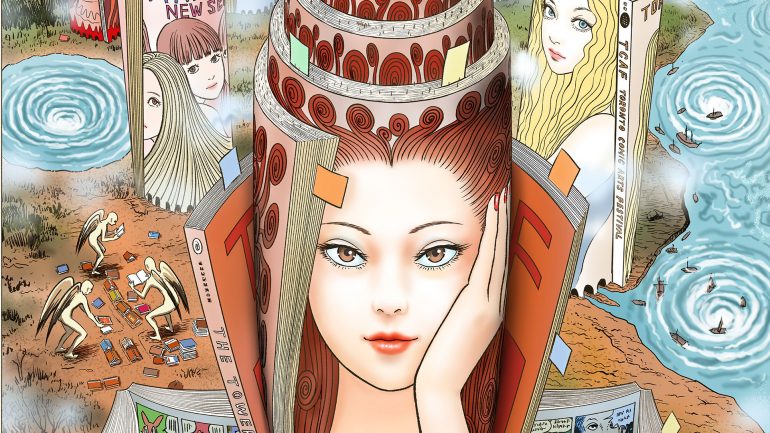 UPCOMING: The Toronto Comic Arts Festival Announces its first round of Featured Guests for 2019!

The Toronto Comic Arts Festival is excited to announce its initial round of Featured Guests of the 2019 Festival! Drawing from across North America and highlighting some of the very best adult graphic novels being published today, these authors will join the more than 350 cartoonists from 20+ countries participating in the FREE, two-day exhibition on May 11 and 12 at Toronto Reference Library!

Each year TCAF showcases Canada’s most incredible comics talent on a world stage by promoting top-tier creators and publishers, and inviting the attention of the global cartooning community. TCAF 2019 will see more than 40 Featured Guests in total, from North America and abroad, and for readers of all ages. In addition to the two-day exhibition, the Festival will include a full week of comics-related performances, readings, workshops, gallery exhibitions, parties, and so much more!

Already announced, TCAF will welcome Japanese manga-ka Junji Ito to the Festival this year! The master of Japanese horror comics will visit North America for the first time to debut his new short story collection Smashed: Junji Ito Story Collection, published by VIZ Media. To celebrate his appearance, Ito-sensei has created this beguiling original poster artwork for TCAF 2019! This is one of three official posters for this year, and all posters will be printed and available for purchase at The Toronto Comic Arts Festival.

Emily Carroll: Canadian writer and artist of numerous award-winning comics, including the horror collection Through the Woods, which won both an Eisner and the British Fantasy Award, and the graphic adaptation of Laurie Halse Anderson’s novel Speak. Carroll attends TCAF in support of her new work When I Arrived at the Castle, published by Koyama Press.

Inés Estrada: From Mexico City, Estrada likes drawing animals and writing about intense things that some people find very relatable and others straight-up disgusting. Her newest work is Alienation, published by Fantagraphics and debuting at TCAF 2019! Inés Estrada attends TCAF this year as a Featured Guest of the Wowee Zonk Pavilion, celebrating 10th Anniversary of Wowee Zonk at TCAF!

Bill Griffith: Creator of the syndicated daily comic strip Zippy The Pinhead, Griffith’s prolific output has been included in such publications as the Village Voice, National Lampoon, and the New Yorker. According to Bartlett, Griffith coined the popular phrase “Are we having fun yet?” He lives in Hadlyme, Connecticut. Bill Griffith attends TCAF in support of his new graphic novel, Nobody’s Fool: The Life and Times of Schlitzie The Pinhead, published by Abrams ComicArts.

Gord Hill: The author of The 500 Years of Resistance Comic Book, The Anti-Capitalist Resistance Comic Book, and The Antifa Comic Book. He is a member of theKwakwaka’wakw nation whose territory is located on northern Vancouver Island and adjacent mainland in the province of “British Columbia.” He has been involved in Indigenous people’s and anti-globalization movements since 1990. Gord Hill attends TCAF in support of The Antifa Comic Book, published by Arsenal Pulp Press.

Lucy Knisley: The author and illustrator of beloved graphic novels about memory, identity, food, and family, Knisley is the New York Times bestselling author of Relish: My Life in the Kitchen and Something New. She lives and works in Chicago, with her husband and child. Knisley is attending TCAF in support of her debuting graphic novel Kid Gloves from First Second.

Anders Nilsen: The author of eight books including the phenomenal Big Questions, Nilsen’s work has been featured in the New York Times, Kramer’s Ergot, and Pitchfork, among many others. Nilsen makes his home in Portland, Oregon, and will attend TCAF in support of his ongoing self-published comic book series Tongues.

Brian Selznik: The New York Times bestselling author and illustrator of The Invention of Hugo Cabret and Wonderstruck, among many other beloved books for children. Selznik attends TCAF in support of his first book for adults, the TCAF-debuting “provocative visual narrative” Live Oak, With Moss, published by Abrams ComicArts. Based on the original poetry by Walt Whitman and reconstructed by Karen Karbiener.

Seth: Seth is the cartoonist behind the comic book series Palookaville, which continues to this day as a semi-annual hardcover from publisher Drawn & Quarterly. His comics and illustrations have appeared in the New York Times Magazine, Best American Comics, New Yorker, the Walrus, and Seth also illustrated TCAF’s very first Festival poster in 2003. Seth will attend TCAF in support of Clyde Fans, his epic graphic novel over a decade in the making.

Vivek Shraya & Ness Lee: Vivek Shraya is the multi-award-winning author of works including God Loves Hair, even this page is white, I’m Afraid of Men, and What I Love About Being QUEER. Shraya has teamed with prestigious Toronto illustrator/artist Ness Lee to release the disturbing Death Threat, an unflinching portrayal of violent harassment and the dangers of online hate, published by Arsenal Pulp Press. Shraya and Lee will attend TCAF in support of Death Threat’sspring 2019 debut.

Mark Alan Stamaty: Acclaimed American cartoonist and illustrator, Stamaty has produced numerous children’s books but is best known for his syndicated comic strip MacDoodle St. Stamaty attends TCAF in support of a remastered collection of MacDoodle St. published by New York Review Comics. Mark Stamaty will only be present at TCAF on Saturday, May 11.